Kate Stevens loves her husband, Harry, and their baby daughter, Cam. But a girl called Valery St. John exists within Kate, an alter-ego of verve and daring that has long yearned for adventure, lust and grief – in male terms.

It takes a chance encounter with a beautiful, charismatic artist named Margo, to bring Valery, and the alternative lifestyle she represents, to the fore. Kate’s ensuing affair with the lesbian painter prompts a personal transformation, and proves a crucible for the relationship between herself and Harry.

When Joan Hawkins’ debut novel was first published by GP Putnam in 1974, it was ahead of its time.  Set in the turbulent days of the early 1970s, it explores a young woman’s journey of discovery as she finds herself at a personal crossroads in a period of massive social and cultural change. Themes of sexual exploration, gender identity, feminism and rebellion blend with a satirical take on the crumbling old order.  The gray suits of tradition are being challenged by student protests, racial integration and the emergence of women in the workplace. Underwater still bristles with passion, humour and defiance, almost fifty years on. 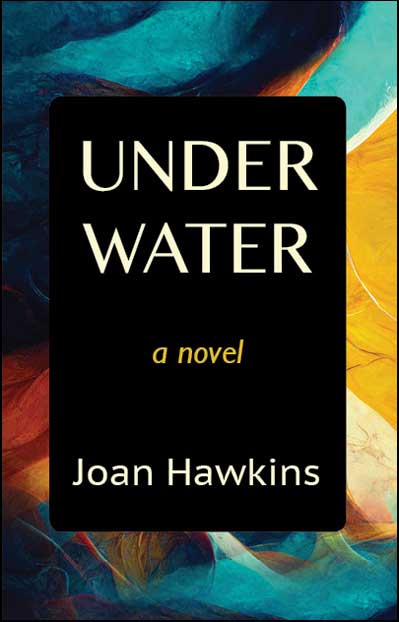 Read an extract from Underwater, on Joan’s website, here.

Underwater is available to order from any bookshop internationally, arriving in approximately 10 days.
US readers can order the book referencing the distributor Ingrams when requesting the title.
Irish readers in book shops around the country should reference the distributors, Gardners when requesting the title.
You can also purchase directly from most international  online book retailers, including: