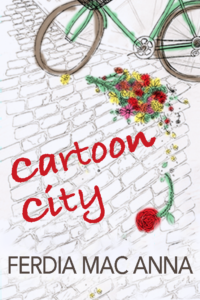 For a classic urban sass novel, cult hit Cartoon City by Ferdia MacAnna is hard to beat, with its wild cast of misfits, rebels and Dublin denizens.

Ferdia MacAnna’s career has brought him from comic writing to memoir, literary fiction and film direction.  This is his third novel, originally published by Headline in 2000, that romps through a comic tale of crime, passion and surreal humour at breakneck pace. With an eye for characterisation and a flair for Dublinese, it pogos  along like Flann O’Brien with rock’n’roll.

The second edition of Cartoon City will be published in time for its twentieth anniversary – expected to crash land on bookshop shelves, online and in electronic format in 2020.