It was great to see Nuala O’Donnell recommend The Light Makers in the Sunday Independent author’s “favourite reads” of 2017, which traditionally guides book buyers in their Christmas book purchases!

Nuala on “The Light Makers”:  “subtle twists and gorgeous prose make this a great read”.

Click on the image below or on this link to hear a review by journalist Eithne Shorthall of Mary O’Donnell’s “The Lightmakers” on RTE Radio 1’s “Arena” arts programme on 27th July 2017. 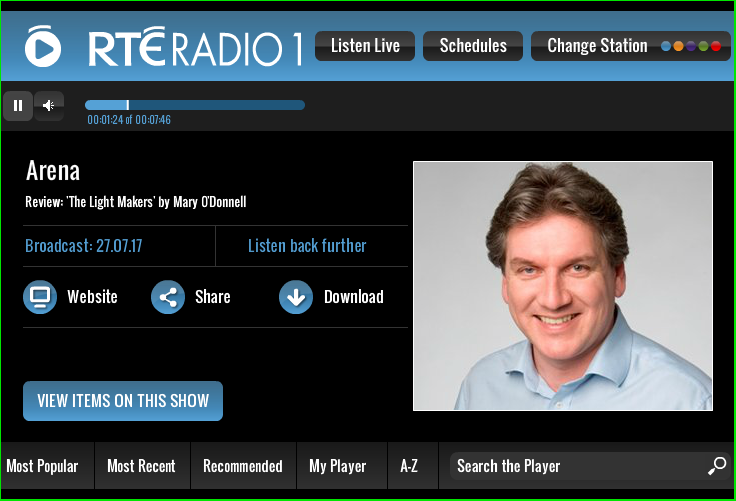 Shorthall described the book as being infused with “strong feminism” and “getting a new lease of life” with its new edition. She observed that it fits in so easily with contemporary conversations that “it could have been published this year”.

Photos from the launch of Mary O’Donnell’s “The Lightmakers”

Author Nuala O’Connor was in flying form as she introduced the special 25th Anniversary edition of “The Lightmakers” by Author and Poet Mary O’Donnell, describing it as a timely re-publication of a classic Irish novel.  The audience, which packed The Irish Writers’ Centre to the gills, was rapt as Mary then took to the podium to give a reading. Following a few words that described the work of 451 Editions from Helena Mulkerns, the crowd lined up to have books signed, or chatted in the light-filled environs of the beautiful house on Parnell Square.  Please see a selection of photos from the launch below.