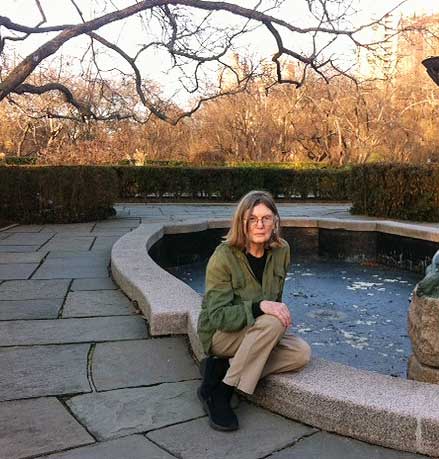 Joan Hawkins was born in Cambridge, Massachusetts. She attended Bennington College and New York University. She lived most of her life in Manhattan, practicing psychotherapy there.

Her debut novel, Underwater, was published by GP Putnam in 1974. The book was critically acclaimed, challenging traditional gender roles and exploring controversial issues of the day. A 40th Anniversary edition of Underwater was published by Landon Books in 2014.  This autumn, 451 Editions publishes a third edition in conjunction with Joan’s latest novel, Family Money.

Joan’s second novel, Bailey, which encompasses themes of addiction and childhood trauma, was published by Landon books in 2012, followed in 2013 by Trespass, a fascinating portrait of a moribund, spirited woman living life joyously to the end. Rematch (2021), set in the early eighties in the higher echelons of New York’s legal profession, is a prescient take on corporate sexual discrimination.

Joan’s fifth novel, Family Money, published this Spring by 451 Editions, is a stunning set piece encompassing a world now rarely seen. An old-world family drowning in a wave of new corporate greed, with its unlikely wayward daughter, Janet Sproule, seeking redemption in lifestyle alternatives. It is, of all her books, perhaps the one at the end of which we glimpse a tentative, ambivalent, but tangible message of hope.

See more about Joan Hawkins and her work at her website:  www.JoanHawkins.net

Underwater is available to order from any bookshop internationally and will be delivered in approximately 10 days.
Irish readers should reference UK distributors, Gardners.  Readers can also buy from major online retailers, including: