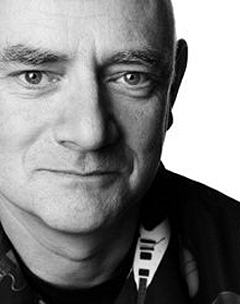 Dubliner Ferdia Mac Anna started out in music, fronting Rocky De Valera and the Gravediggers in the punk era, and latterly, The Rhythm Kings. His first novel, The Last of the High Kings, was originally published by Penguin, with a “Modern Irish Classics” edition brought out by New Island Books in 2011.  It was made into a film starring Gabriel Byrne and Jared Leto. His other literary work includes novels The Ship Inspector and Cartoon City as well as a memoir, The Rocky Years.

He was producer and script editor on the acclaimed BAFTA-winning BBC/RTE children’s drama series, ‘Custer’s Last Stand-Up’ and he lectured in Screenwriting and Television Production at various colleges including The National Film School IADT. He currently lectures at UCD and the Open University.  He is also a sought after film script and fiction writing coach.

His debut feature film, All About Eva, premiered at the Jameson Dublin International Film Festival in 2014. His second feature, DannyBoy is a music-focused drama set in small town Ireland in 1981 and is set for release this year.

The 20th Anniversary edition of Cartoon City  was launched on 15 October 2020.  Special signed copies are available from us at:  online @ 451Editions.com   and direct from the author.  It’s also widely available for purchase from Waterstones in the UK to Booktopia in Australia. Scroll down for a full list of links.

Watch an interview with the author by Kildare Art Officer Lucina Russell here:

To purchase a Special Edition signed copy of Cartoon City, contact us or the author directly.
Cartoon City is available to order from any bookshop internationally, arriving in approximately 10 days.
Irish readers in book shops around the country should reference the distributors, Gardners when requesting the title.
You can also purchase directly from most international  online book retailers, including: